And now we come to the final Monstrous Monday of October. Part of me feels like I’m ending on a whimper, rather than a bang. However, another part of me feels just the opposite.

Why? Because this week, I’m taking on zombies! And, as I said when I posted my very first monster, one of the things I wanted to do with these Monstrous Mondays was explore new and interesting ideas. And while zombies are…let’s face it, a bit played out, I think there’s still a lot of room to mechanically explore the idea.

And that’s why I bring you two new zombies today. I could have gone the easy route and just made zombies out of monsters in the Monster Manual. But I didn’t want to do that. I wanted to bring in a whole new idea of HOW to use zombies in your games. New strategies you can play with to bring some life to what is probably the most standard low-level monster in the game other than the goblin.

Therefore, I present the Tortured Soul and the Necro-Tank…

These zombies were actually invented by the DM of my current game. We affectionately referred to them as “vombies”. I hope you see why. I asked him, after a session, if I could stat them out and publish them (he’s a very low-note DM, and didn’t fully stat them out). He said yes, and then I went through the task of getting the numbers right while still maintaining the flavor of the creature he originally created. I think I did a pretty good job. I hope he agrees.

Tortured souls are zombies that were tortured in life, and then killed in a necromantic ritual that involves drowning them in acid. They become almost engorged by the acid, and their flesh transforms into an almost jelly-like substance. Unlike normal zombies, known for their hardiness in combat, tortured souls are falling apart at the seams. This prevents them from attacking like a normal zombie, as they might simply pop or tear if they exert too much effort. They instead grapple their foes and vomit acid onto them as their main attack. When killed, their skin gives way and they explode into a splash of acidic goop. In addition, whenever they are struck by a corrosive attack, they can similarly explode as it weakens their skin. In hordes, this can lead to terrifying chain-reactions as one vombie detonates, causing all of its compatriots to do the same. 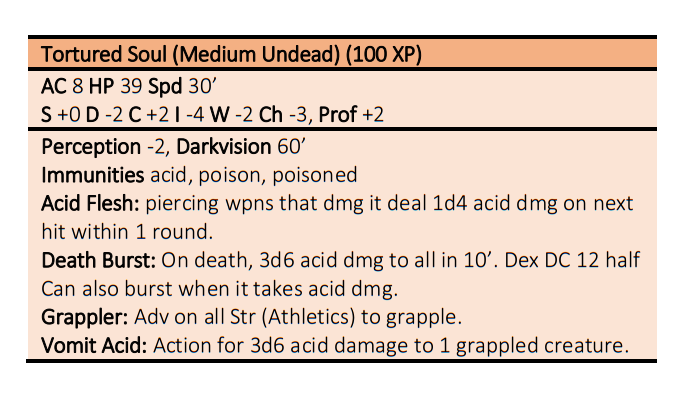 I’ve been toying with the idea of leader monsters lately. In previous editions, it was as simple as giving a goblin bard levels. In 5e, the math makes it a bit trickier. As can, to be honest, the flavor. Different monsters prioritize different mechanics, and a zombie isn’t going to benefit from the same effects as, say, an umber hulk. The Necro-Tank is my attempt at creating a low-level zombie leader. Something you can throw into a horde to make the whole combat more interesting and dangerous.

Necro-tanks are named so not because they are particularly defensive or tough, but because they are literal tanks of necromantic energy. One in a thousand zombies, when born, will be infused with necrotic power, giving them greater intelligence and new abilities. This energy radiates off of them in waves, allowing them to inflict greater damage on foes and prevent their allies from fleeing in combat. They can even transfer some of this power to other undead, giving them the ability to unleash the very energies that animate them.

As always, here are the PDFs.