QUICK UPDATE: The Monster Archive on my Downloads page has been updated to include all November monsters.

And welcome to the first unofficial Monstrous Monday of December. I’m starting early, because I’m incredibly excited to bring you guys some cool stuff. This month, in honor of the Christmas season (or Hanukkah, Ramadan, Festivus, whatevs) I’ve decided to give something back! Every Monstrous Monday this month is going to be a reader-submitted monster. Unfortunately, however, I’ve only got 5 Monstrous Mondays, so I can’t get to all of them. Therefore, I’m going with what I consider, through my completely scientific decision-making process (holding pieces of paper with the monster’s names on them in front of my dog and seeing which one he chooses), entries that are either interesting, evocative, or hilarious.

This first week, we’ll be tackling another owlbear. In fact, it’s another snowy owlbear. Now, for those of you who read my article on Dungeons and Darwinian Evolution, you’ll remember that I already designed a polar owlbear. So why am I designing another one? Because Neil Klopsch suggested something a little different. Not a polar owlbear, but a Hyperborean owlbear. What the hell is that? Follow me, and I’ll show you.

Beyond the North Wind

In greek myth, Hyperborea is the land beyond the North Wind. It is the icy realm of Boreas, the god of the North Wind. The Hyperboreans were the inhabitants of this strange land: odd, perfect individuals that were believed to be immortal and immune to disease. There are many tales that reference this strange land where the sun does not set, but hindsight is 20/20, and most can probably tell that the greeks were talking about the Arctic circle.

However, in Dungeons and Dragons, we are not limited by such mundane explanations. In D&D, Hyperborea can be Boreas’s realm on earth, where those beings that live there are infused with his power and changed. Men and women become the immortal, hypnotic Hyperboreans. And monsters? Well, monsters transform into magical impossibilities, becoming both beautiful and terrible.

Why Not the Polar Owlbear?

The difference between the Hyperborean Owlbear and the Polar Owlbear can be equated to a difference of approach. Polar owlbears are an experiment in natural selection guiding the direction of an owlbear’s evolution. This is an attempt to create a god-touched monster.

Hyperborean owlbears are almost more a force of nature than a monster, and many scholars believe that they are more frost than flesh. Their claws, beak, and eyes are all made of iridescent blue crystal, and their fur and feathers are flecked with icy crystals. They are harmless to native Hyperboreans, and will even offer them passage across the vast white planes of Hyperborea. However, they view all outsiders as intruders and relentlessly attack on sight.

Hyperborean owlbears are truly sacred creatures. Most wander the snowy vastness of the land with a kind of disaffected melancholy, simply hunting, sleeping, and traveling. They have great respect for their land and its native inhabitants, and possess a deep reverence for Boreas himself. Some of the owlbears even act as guardians for the deity’s holiest sites, never leaving their post and yet never feeling hunger or thirst. 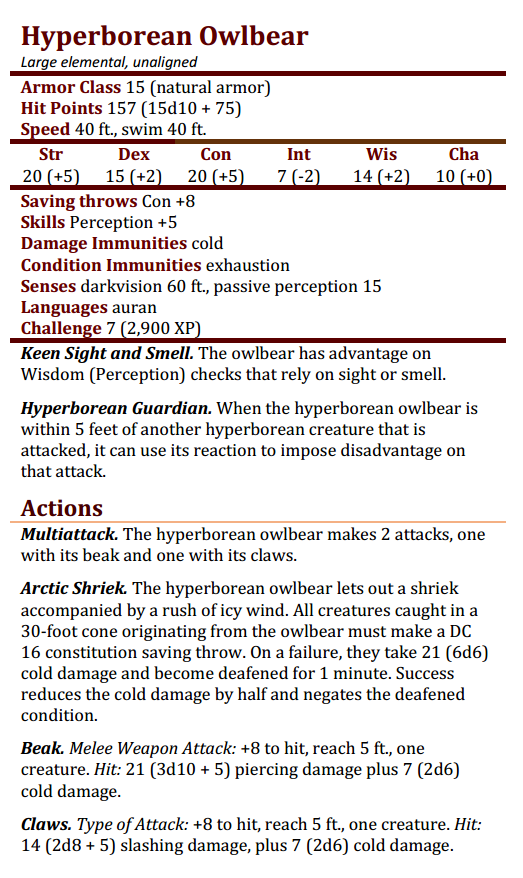 Now, if you’re familiar with 4th edition, you might claim that I just made a 5e Winterclaw Owlbear conversion. And, in part, you’re right. I did. However, I hope that the narrative direction of this monster makes a bit more sense than “an owlbear, but with Winter in its name;” particularly when dealing with its special features.

As always, here’s the PDF.

Again, big thanks to Neil Klopsch for this week’s suggestion.

If YOU want to offer a suggestion for a December Monstrous Monday, then leave a comment below or send me a message with your idea through my Contact Me page. See you all next week!