And finally, we reach the dodongo! The big challenge with this one was to create a monster with a weak point: the dodongo’s tail. The inherent problem with this is that standard D&D doesn’t have facing rules. Therefore, “getting behind” the dodongo in order to attack it is superfluous. Instead, I decided to add a trait called “weak point,” allowing the player to bypass the dodongo’s damage resistance by suffering disadvantage on their attack roll. Simple, and appropriate.

But that doesn’t mean it’s not problematic.

The great part of creating a monster with a weak point is that it adds a new dynamic to the fight. People are actively trying to attack the weak point, potentially putting themselves in danger to do so. Pretty cool, right? Except, unless you literally tell the players that the monster has a weak point or make it painfully obvious by making it glow bright red, then it’s actually a bit difficult to convey the weak point to the players. Weak points violate the standard combat rules, so even if you explicitly state “the draconic beast is covered in stone-like armor, all but for its tail,” players might not take that as a cue to attack the tail. After all, “called shot” or “targeted attack” are not core methods of attack within D&D. 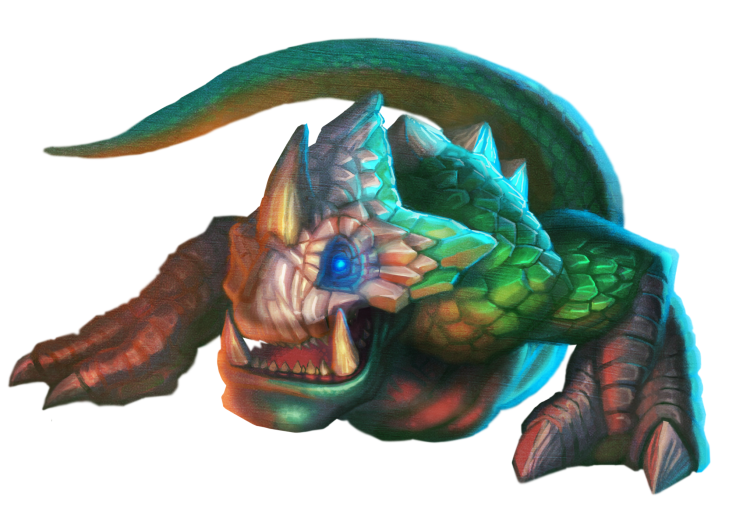 How do we solve this? Preparation and propagation, my friends. The session you introduce a monster with weak points, tell your players outright that you’re introducing monsters with weak points. Tell them that they can target a weak point by suffering disadvantage on their attack roll, and that attacking a weak point will give some special benefit. What’s that benefit? Depends on the monster. Maybe attacking the Goblin King’s gut “poisons” him for a round. Maybe attacking the vampire’s heart makes him vulnerable to normal weapons for a turn. In this case, attacking the dodongo’s tail bypasses its armor, and allows you to deal normal damage with weapon attacks.

Without further ado, here’s the dodongo.

And here’s the PDF: Dodongo.

Next week, I’m going to close out this zelda journey by designing an iconic Zelda boss monster. I don’t know which one, yet, but I can’t wait to make this happen.

2 thoughts on “Monstrous Monday: The Dodongo”