I promised a boss monster last week, and I plan to deliver! That’s why I’m giving you guys the mother of arachnids, Gohma! That’s right, this little lady right here. 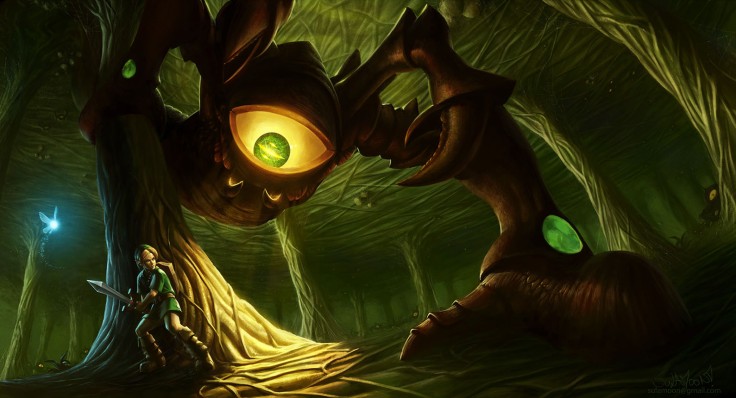 This was an interesting build. Like the dodongo, Gohma has a weak point. If you’ve played basically ANY Legend of Zelda game, you’ve probably faced her, and it’s pretty easy to figure out what part to hit: the eye. Except, she’s got another hallmark. It’s not just the fact that her eye is her weak point. It’s that you can only hit it occasionally. Either she closes the eye, blocks it with a shield of some kind, or it’s only vulnerable after an attack. I decided to go with the third option (despite it being the worst in the games themselves) because it gives me a solid trigger for when to make the eye vulnerable. You can only hit her weak point AFTER she uses one of her Eye Beam attacks. This makes the battle one where you’re waiting for her to unleash her attacks so that you can strike true and bring down the beast.

I also decided, like the dodongo, to go with damage RESISTANCES rather than damage IMMUNITIES. In the games, true, it’s impossible to damage Gohma (and dodongos) without hitting her weak point. However, this means that the engagement is controlled by the monster, and that’s simply not as fun. I want to give the players agency when fighting monsters. I want them to control the engagement and decide how they’re going to fight their enemies. By allowing Gohma to still be hurt by most elemental attacks, as well as just giving her resistance, rather than immunity, to physical attacks, it gives the players multiple options and avenues for combat.

I also allowed her to spawn her own allies. They’re generic, and won’t do that much damage to the players, but their simple existence can really help to change up an encounter. Tossing three minions, even CR 1/2 minions during a CR 10 encounter, at a mage or a lightly-armored rogue can change up a party’s priorities. And by making it a legendary action, you allow Gohma to change up the flow of the battle by interrupting the players’ actions.

But I’ve blathered on enough about the design of this monster (which was, by the way, a LOT of fun to build). Here she is: Gohma!

And, of course, here’s her larvae. 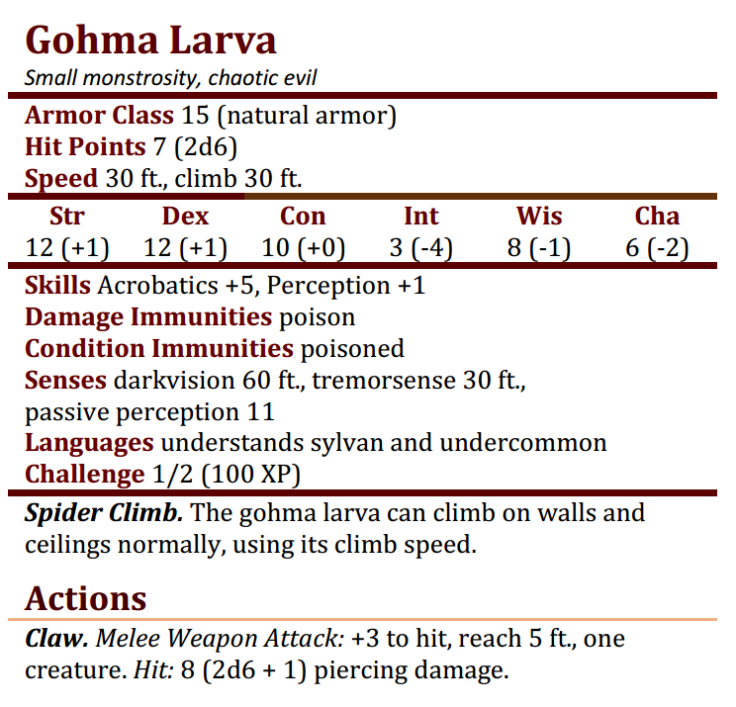 And finally, here’s the PDF with both of them: Gohma and Larvae.

Did you enjoy this monster? Want to see more? Then go ahead and follow this blog by clicking the Join button to the right! And if you really did like seeing what I could do with Gohma, then I encourage you to click the like button, and maybe leave a comment. And if, maybe, you’re trying to get your GM to run a Zelda-themed D&D game, then I encourage you to click one of the share buttons below, as well as share my other Zelda monsters, the Deku Baba, Redead, and Dodongo.

And hey! If you’ve got a monster that you’ve designed, or an idea for one that you’d like me to flesh out, then drop by my Contact page and send it to me. I assure you that you’ll get all credit.

Until next time, folks!