I’ve been playing a lot of Final Fantasy XII: The Zodiac Age lately, and it’s got Final Fantasy on my brain. And, of course, that means that I’m puzzling out ways to make iconic weapons, armors, and wondrous items in D&D.

Now, I didn’t make a Gunblade or Buster Sword, but instead went for some of the more famous recurring items in the series. They may or may not be overpowered—I don’t have a great eye for that sort of thing—but I feel like they capture the idea and theme of the items in question. Especially since most weapons, armors, and accessories in Final Fantasy games are just there to inflate your stats.

I did include the Ultima Weapon, though. You know, because I kind of had do.

In addition, I decided to revise and compile all of the magic items I’ve published on this blog into an archive document: Magic Item Archive. This archive can also be located on the Downloads page.

This blade was awarded by Queen Brahne of Alexandria to her most skilled general: Beatrix.

At the dawn of each day, you may use an action to designate a single creature that you can see as your ward. You may only have a single ward at a time. Whenever your ward takes damage, you also suffer the same amount of damage yourself. However, as long as you remain conscious and do not forsake your ward, all damage dealt to them is reduced by half. You may forsake your ward as a bonus action.

In addition, whenever your ward is within 5 feet of you and would be hit by a weapon or spell attack, you may use your reaction to interpose this blade between your ward and the attacker. The attacking creature must then re-roll the attack roll with disadvantage, taking the new result.

These blades were originally forged to combat mages, but have since fallen out of favor with soldiers. They have found a new home in the criminal underworld, however.

This magic dagger has 3 charges. Whenever you hit a creature that can cast spells with this weapon, you can expend a charge to force them to make a DC 17 saving throw. The saving throw type is the same as their spellcasting ability score. If they fail, they cannot cast spells or use magic abilities for 1 minute.

A creature whose magic is sealed by this weapon can repeat the saving throw at the end of each of their turns.

It’s said that this weapon is actually the condensed soul of an impossibly-powerful creature, and it only grants its true power to those it deems worthy.

When you attune yourself to this weapon, you may choose its weapon type from any weapon with which you have proficiency.

Once per round, when you hit a creature with an attack using this weapon, it deals 1 additional point of damage for every 10 hit points you currently possess. If you possess temporary hit points, add them to your current hit points and use the combined total to determine the additional damage this weapon deals.

This armor is traditionally worn by dragoons, the greatest warriors in the kingdom of Baron. 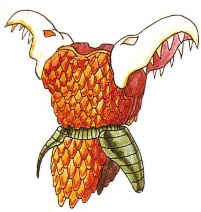 This prismatic suit of armor is composed of the scales of a variety of dragons, and uses two dragon skulls as pauldrons. As an action, you may change the composition of the armor to the scales of a single type of dragon: Black, Blue, Brass, Bronze, Copper, Gold, Green, Red, Silver, or White. As long as the scales remain that type, you gain resistance against damage that is the same type as that dragon’s breath weapon. You may return the armor to its original state as an action.

In addition, as long as you wear this armor, you can jump three times as high and far as you normally could.

These armored gloves were once wielded by the great warrior Gilgamesh.

This item has three charges. You can engage in two-weapon fighting even when the one-handed weapons you are wielding aren’t light, and you can add your ability modifier to the damage of your off-hand attacks. These benefits do not stack with similar abilities.

In addition, whenever you use your bonus action to make an off-hand attack, you can expend a charge to make two attacks with your off-hand weapon instead of one.

Did you enjoy this article? Want to see more? Then consider supporting me by buying me a coffee over on my Ko-Fi page.

No disposable income or motivation to give it to others? Then click the Join button on the right-hand side of this page to follow the blog and stay up to date every time a new article lands. And if you want to see the blog get some more traffic, then I encourage you to click the Like button below, and share it with your friends and fellow gamers by clicking the share buttons as well. I don’t pay to advertise this blog, so if it’s successful, then that’s thanks to you.

And, of course, if you want to contact me, then you can use my Contact Page or e-mail me at LootTheBodyBlog@Gmail.com.